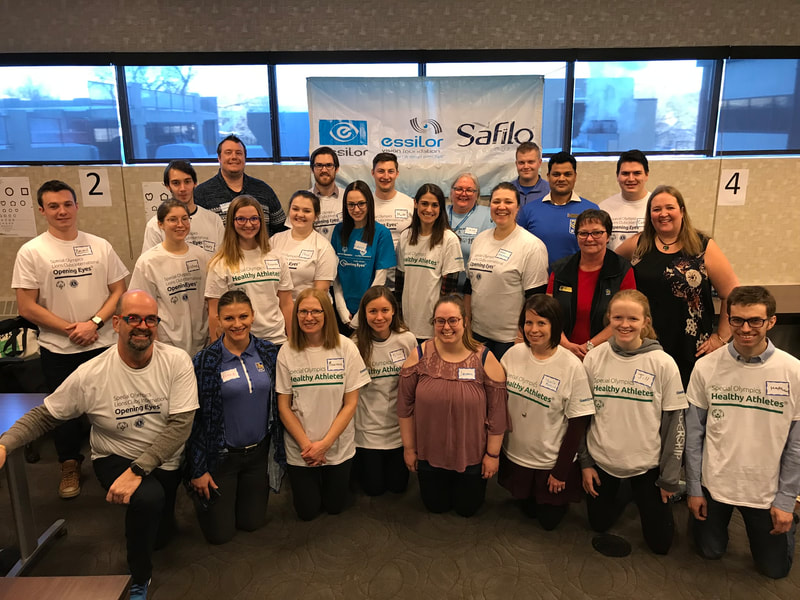 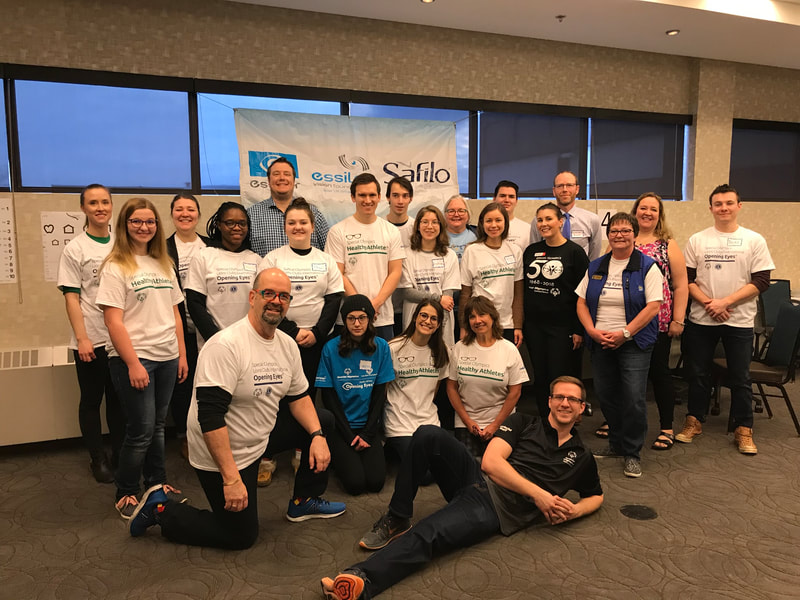 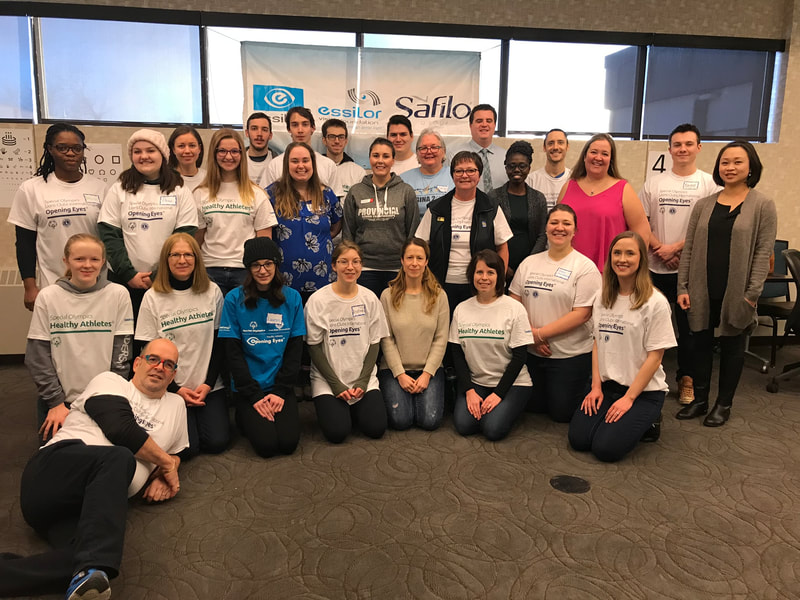 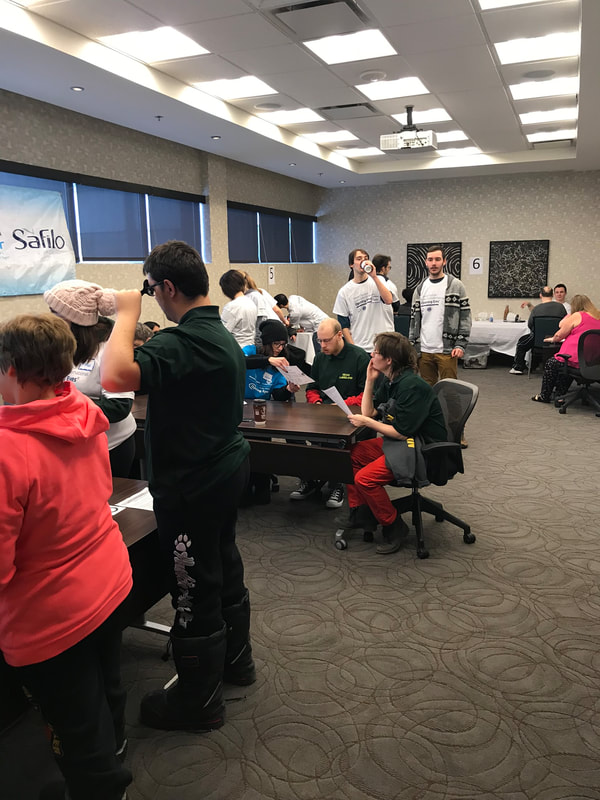 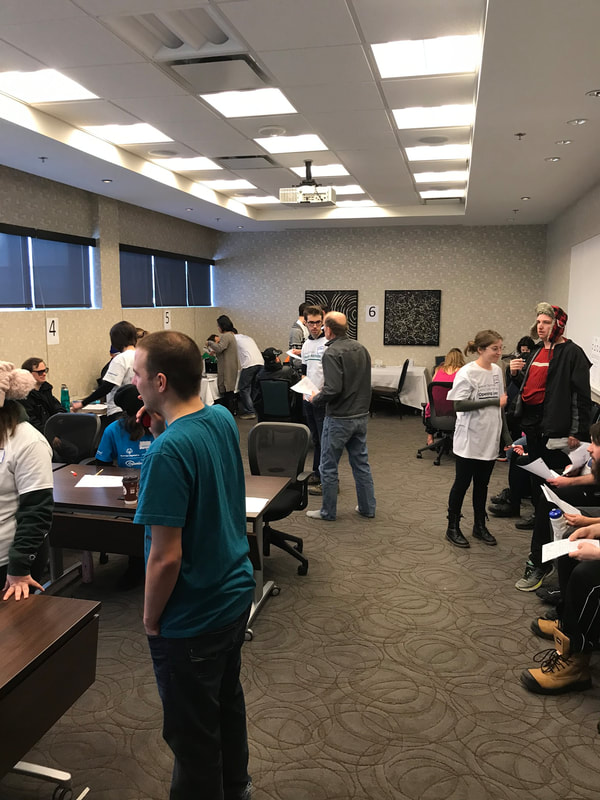 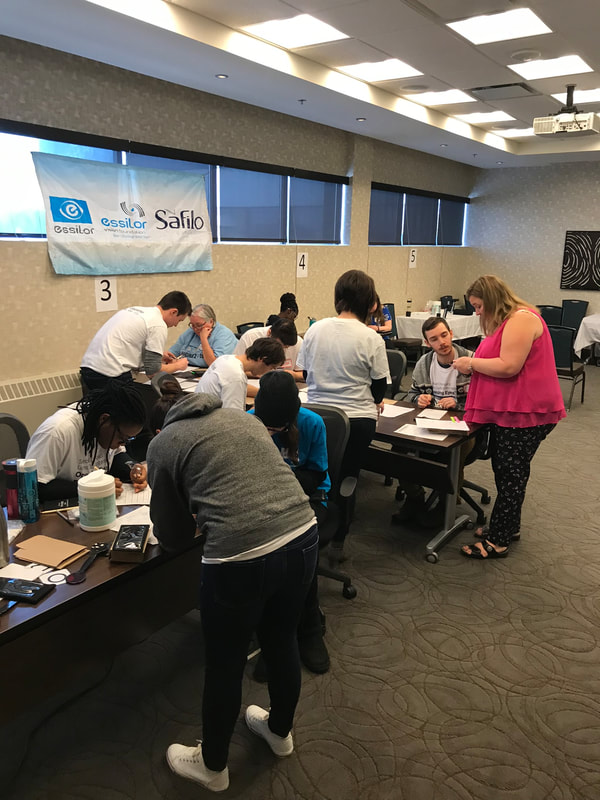 I had the experience to volunteer at the Special Olympics in February 2019 as part of the Healthy Initiatives - Opening Eyes station. Each day we had a different group of volunteers participating, although many returning.

Orientation began at 4 pm on Friday, February 8th, 2019, the director of the Special Olympics, Ben Lozinsky, began seating us in the Silver Birch Conference Room at the DoubleTree Hotel in downtown Regina, giving us white t-shirts labeled “Healthy Initiatives: Opening Eyes” in blue writing. The directors of the Opening Eyes clinic introduced themselves, beginning by explaining how long they have been practicing optometry, both coming all the way from Ontario for this event. They traveled to every Special Olympics held across Canada, hoping to better the athletes with vision testing and prescriptions. To further explain their job at the event they explained that only a quarter of the athletes had access to eye care and that the importance of the clinic was to help those who needed glasses. Our director continued to talk about the “high functioning” athletes, telling us that some express themselves with hugs and touching and that some may be non-verbal. This brought a pronounced nervousness upon me, unsure of how I would approach the situation if it happened.

The clinic was set up in 3 rooms the first day, 8 stations spread out along the halls and rooms. I began at the first station, working on the visual acuity of each eye on an athlete from a distance. The directors showed us how to do the paperwork for each station in case we had to shift to other spots due to a backlog, which tended to happen at the last station which was the refraction station; testing their sight from a distance with the different lens placed over their eyes to provide clarity, only able to be performed by an optometrist. There was an abundance of volunteers present, many being “runners”, helping the athletes along each station. The first athlete that I helped was non-verbal, I was extremely nervous to begin with, but it furthered the nerves and the director could tell. She moved me then from the station to running around with athletes.

The switch between stations allowed me to meet an athlete who were extremely nice, we held some great conversations full of humor as I led him around the stations. He nicknamed me “Freshman”, referring to the fact that I was only in my second year of university. The day slowly ended, and athletes slowly moved in and out of the stations. Finishing off the day at 9 pm and going home for an early start the next morning.

Saturday, February 9th, 2019, the second day for the Special Olympics, the clinic started at 8:30 am, the weather was cold, another event canceled and moved to Sunday. Athletes slowly started filling the stations, I sat at the first station for visual acuity, adjusting to being more efficient. The majority of the athletes were bowlers, who had bowled the Friday night missing the clinic. The day was slow with a bit of an orientation first thing in the morning for the new volunteers joining us and then hopping into the stations as athletes came through. There were a couple instances where I was unsure of what to do when some of the athletes were having a difficult time understanding the instructions and I would approach our directors for help. They would talk me through the situation and allow me to try again while they supervised, stepping in when needed. This helped me practice our class material on approaching and talking to athletes with disabilities. By 12:00 pm on the second day, my nerves had subsided, and I was sad that Sunday would be my last day to volunteer.

The last day of volunteering on Sunday, February 10th was by far the busiest, many athletes coming to get their eyes checked before they head home for the event coming to a close. The day had come to an end we were assigned to fill out paperwork for prescriptions for the athletes. This task was by far the most challenging as we had to make sure everything was 100% correct in order for the actual prescription to be made. I felt like this task was a bit too advanced for what we had initially learned, and we were relied on too much.

Further, I hadn’t been able to move from my station all weekend, this I felt was a downfall as I wasn’t able to experience the full capacity of the clinic. It would have been a great experience to have helped at all the stations and been able to test my ability to adapt to different situations and tasks. It was a challenging weekend challenging my skill of learning the course material and applying it to the tasks at the clinic.
​
I had grown to enjoy the interactions with others, and I had also bonded with the volunteers and directors. My relationship with the athletes throughout the experience was positive, it held me to challenge the stigmas of interacting with people who have disabilities. Allowing me to see the huge benefit in opening society to an inclusive lifestyle, our director made a comment during our orientation, further pushing for inclusivity, “It’s not you helping them, it’s them helping you”. I enjoyed this experience, opening my eyes to inclusive opportunities and the relationships that can last a lifetime. I hope to further volunteer at other Special Olympics events and learn more about disabilities.